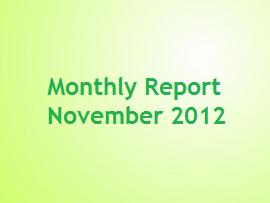 Time is running fast if you have more things to do. It’s December now. That’s mean the time for me to publish November 2012 monthly report.

I like to try new frequency in publishing new post at the blog. Increasing frequency absolutely gives practical advantage and disadvantage. One of the advantage is improvement in alexa rank while one of the disadvantage is time-consuming matters. As part-time blogger, time issue is imperative to be concerned.

Besides post’s frequency I am also change the blog theme due to some reasons. I’d like to describe it on “What’s new here?”.

There’s a bad news on adfly income. The numbers of clicks are drop  compare to last month report. Besides, I am closing “social signal marketing” because of some reasons.

Well, let’s not taking the introduction for long. Here’s the report :

As I previously mentioned there are more post getting published during November. The posts are eight posts in English and three posts in Bahasa Indonesia. Outside the blog I wrote single guest post at Itechcode.com. And I really like to keep the pace for the following years.

Theme changing. Previously I used twenty-eleven theme on wordpress. I used it to show simple experience toward reader. However, I decided to change it due to technical problems that I am not capable of solving it (I am not a tech-savvy blogger by the way). The background colors often damage every time I put text ads on the page. That’s so annoying, it took long time for me to solve the problems. Until I found mythemeshop then I decide to install it here. It looks better now in my perspective. Moreover it gives static sidebar which is good for monetizing purposes.

I am also considering to close “social signal marketing” since I like to update more on posts and build greater audiences. I’ll  shut it down this month. On the other hand, I like to focus more on advertising and affiliate marketing as a source of monetizing blog.

In networking, I am update the facebook fanpage widget at the sidebar (May be you’ll think it’s a bit late for that) Actually I was observing the progress on facebook so far until I finally decide to install the widget here. I never particularly promote my facebook fanpage before, I guess this is the right time for that. Let’s see how it can affect this blog performance in the future.

I’ve got five new clients this month which mean extra $25. It’s earn me some cash for sure, but I will close this service anyway. However, I want to give more concern to develop blog performance and focus on enhancing more business partnerships in monetizing this blog.

2. Why I Will be Using GetLinkspro to Perform Link Building Service of My Blog?

3. How to Make Money from a New Blog as Fast as Possible

4. How to Spend Three Days in Kuta? Notordinaryblogger goes to Bali

5. How to Turn Regular Posts into Popular Posts and Make It Help You Achieve Business Goals

6. 4 Ways Not to Fail in Affiliate Marketing

7. 6 Awesome Tricks to be Excellent in Writing Posts of The Same Topics

8. 6 Benefits of Applying Transparency within Your Blog 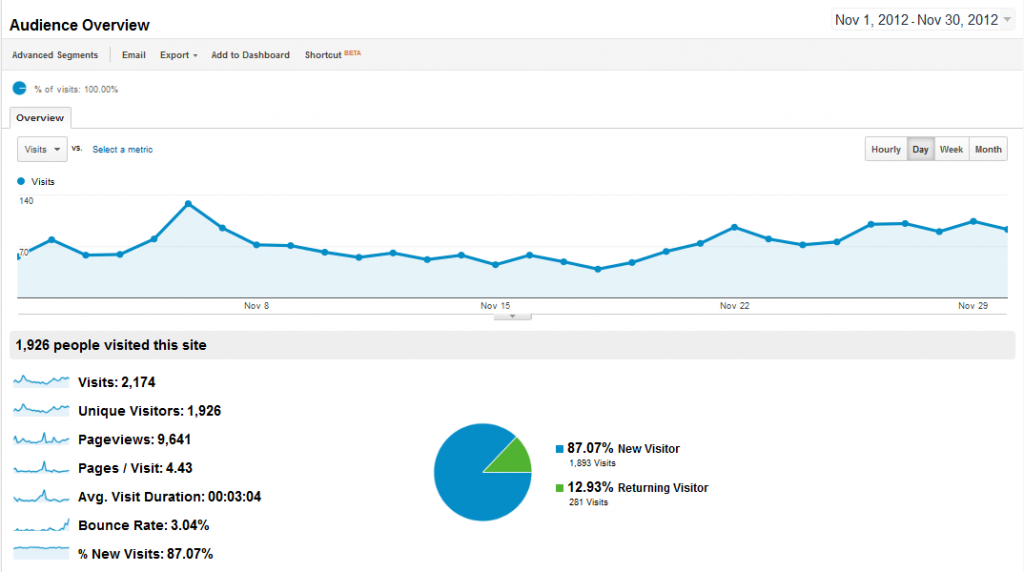 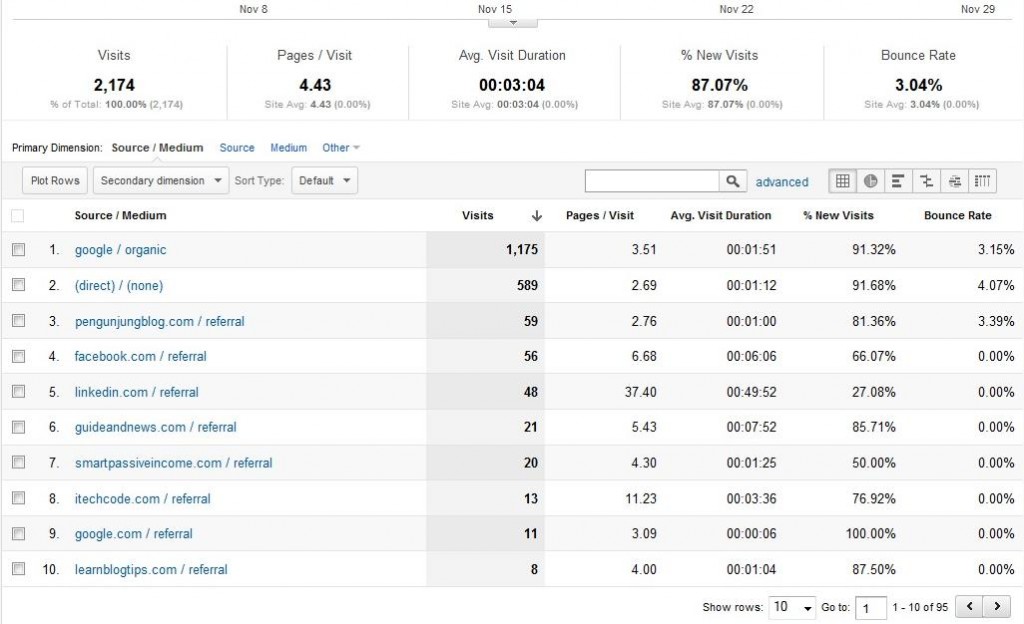 There’s a slight progress on the three factors (visits, unique visitors and pageviews). However, the progress are positive which mean this blog on the right track.

I am happy to know the traffic increases. We like to thank you to all visitors trust within our content updates.

Adfly is one of some ways we use to generate income. We have drop income reports for this month. Looks like there going to be a lot of hard works a head to increase the income from this platform.

Here is our November 2012 adfly report

Take a look on adfly

What Lesson I Have Learned?

Having traffic is a must for every blog thus building a lists is a good option to get that goal. But the greatest obstacle I face is this blog concept that makes people resist to subscribe. May be I should give it another try in future and take a look if there is different respond. In the other hand, of course I like to develop a way out through trial and error process.

The main point of building a list is to have loyal community isn’t it? If so, then social media provide alternative for that purpose. Facebook seems to be an ideal place for this blog to start having community.

May be you like to read our previous monthly reports :

How is Your Blog Progress?

NextHow to Fix Missing Body Text in Blog Post (for Wordpress Blog) »
Previous « How to Break Readers Resistance to Buy from Your Blog?